Located in the community of Dockton on the southwestern part of Maury Island, the general store and post office building is the only well preserved example of an early 20th century commercial building on Maury Island. Like other country stores on Vashon Island, the Dockton General Store was built close to the water in order to serve customers who traveled by boat. As the automobile brought greater mobility to rural residents, many small stores suffered as their former customers traveled to more regional stores and markets. The owners of the Dockton store defied this trend by offering automobile repair service and selling gasoline, thus ensuring that their customers with cars still visited the Dockton store. The store was restored in the early 1990s for use as office space.

Vashon Island writer and voice actor. His Hoytus Interruptus podcast can be found at http://www.hoytus.com
Home

It’s with us all the time, yet we’re rarely conscious of its presence. It ratchets up our tension and anxiety without our even knowing it. Stealthy but lethal, the fact is that constant and unyielding ambient NOISE messes with our nervous systems in ways that just aren’t easily detectable on the surface.

When my wife and I first moved to the Northwest fourteen years ago, we lived on top of Queen Anne Hill. We loved every minute of our time there, but after a few years, we noticed that the “din” of the city which permeates every inch of Queen Anne seemed to be getting louder. In reality, it was probably about the same as it had always been, but we seemed to be more aware of it than ever before. 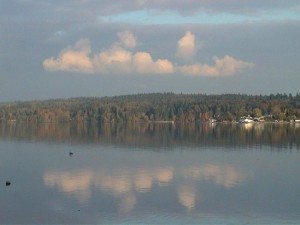 Eventually, we moved to the north end of the city, to a larger house which would both accomodate our growing family AND bring us an enhanced sense of peace and quiet. Nestled in the woods next to a large urban park, it was indeed quieter there, but after six years or so, that constant urban “thrum” we knew so well somehow seemed to find its way to our idyllic little oasis.

Our next (and last) move was to Vashon Island. To say that Vashon is dead quiet would be a heaping load of marketing and tourism fiction. Vashon is NOT dead quiet. No such spot exists in all of Western Washington. There are places on Vashon, however, that lack the ever-pervasive hum that’s next to impossible to escape on the Seattle side of the Sound.

Vashon is just quiet enough so that you can pick out and appreciate specific sounds in all their pure and unfettered splendor. The crow of a rooster, the clip-clop of a passing rider on horseback, the happy squeal of a young child being pushed on a swing. Each of these sounds comes across more cleanly and pleasantly when not enveloped in the ambient din of the city. 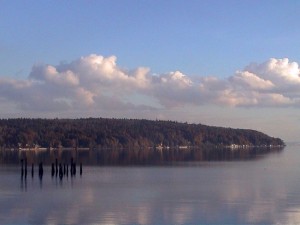 In our eight-plus years on Vashon, I can’t consciously detect whether my anxiety level has genuinely decreased, although friends and colleagues who have known me before and since our move to the island tell me that my voice lacks some of the sharper edges it had when we lived in the city. Noise, or the lack thereof, HAS to have something to do with that.

On Vashon, ambient sound is still very much a part of island life, but it’s a softer kind of ambience. The sounds of tree frogs in the wetlands rock us to sleep through open windows each spring. A herd of rutting elk on a neighbor’s farm nearby provides an eerie autumnal backdrop around mid-September.

No place is perfect, of course. Vashon is directly even with Sea-Tac airport, so we are not spared the occasional low-flying 747 making its final approach. A sure sign of summer is when the one gentleman who owns a hydro race boat on the island cranks it up for a 6am roar across Quartermaster Harbor. There’s also a guy in the woods behind our house who has a deep, abiding affection for his chainsaw. And a walk on the beaches that face both Seattle and Tacoma does not come without that familiar, though distant ‘urban hum.’ What makes these annoyances tolerable, though, is that they can be escaped. The planes stop flying in the deep of night, and the center of the island provides a respite from the city’s constant reminder of its presence.

If you’re a city dweller, you probably won’t even realize how much you needed the peace and quiet Vashon has to offer until you get here. A day trip will provide a nice temporary respite. A weekend getaway to an island B&B will take your sense of relaxation to an even deeper level. I can promise you this, though: after you leave the island, the first thing you’ll ask yourself when you get back to the city is, “where did all that racket come from and why haven’t I noticed it before?”